The total volume of Bitcoin options on Deribit hit its highest level since the FTX exchange collapse. Deribit is one of the world’s largest cryptocurrency options exchanges, therefore the spike in options volume signals a bullish shift in investor sentiment.

Bitcoin options traders are bullish on a massive rally in BTC, with call volume exceeding puts.

Also read: This is the real reason Elon Musk’s Tesla did not sell Bitcoin in Q4 2022

Bitcoin price wiped out its losses from Samuel Bankman-Fried’s (SBF) FTX exchange collapse and made a comeback above the $23,000 level in January 2023. BTC has consistently yielded gains for holders in the first three weeks of the year. Despite a spike in profit taking by short-term BTC holders, the asset has held its ground above $23,000.

From the recent data on options, it is evident that the market is recovering from the spreading FTX contagion and crypto lender Genesis Global’s bankruptcy. The total volume of Bitcoin options on Deribit climbed to $4.25 billion in the week that ended on January 20.

This is the highest volume of options traded since the collapse of SBF’s FTX exchange. Data on options activity on Deribit exchange is a reliable indicator of the sentiment among options traders since the platform accounts for 90% of the global trade volume and open interest.

Crypto options intelligence platform Amberdata revealed that the spike in BTC options trade volume last week was a 375% increase from the $895 million low registered in the last week of 2022. It is important to note that this marks a shift in sentiment among Bitcoin options traders that represent both institutional traders and private investors.

Influx of capital in Bitcoin options confirms the BTC uptrend

Analysts at Kaiko Research recently shared a note with their clients commenting on the share of calls relative to puts.

The share of calls relative to put volume is currently at more than 66%, its highest level in over a year. This is yet another indicator that sentiment has improved in January.

As seen in the chart above, data from Amberdata.io signals a dominance of calls bought and sold over puts bought and sold in the last 30 days. The impressive recovery in trade volume of Bitcoin options and calls dominance is driven by bullish bets made by options traders.

Experts at Kaiko believe that  an uptick in open interest alongside Bitcoin’s price rally suggests an influx of capital on the bullish side and this is a confirmation of the asset’s uptrend.

Bitcoin price gears up for massive rally to $28,000

Bitcoin price is currently changing hands at just above the $23,000 level. It has arguably reversed its bear market trend, at least in the short-term, after breaking above the November 5 highs at $21,473 (the last lower high of the prior bear market) and doing so on high volume and very strong momentum. This favors bullish traders. Furthermore it has broken above the 50, 100 and 200-day Moving Averages.

As seen on the BTC/USDT 1D price chart below, Bitcoin has printed two consecutive bull flag patterns in January. The last bull flag formed after it began its rally on January 19. The 19th, 20th and 21st were all up-days and may constitute the ‘pole’ of this flag. Since then it has been trading sideways. If there is a breakout from the current consolidation pattern, the flag will likely run up by the height of the pole extrapolated the same distance higher, which in this case would forecast a move up to about $26,005; or, for a more conservative target, the 61.8% fibonacci extension of the pole to roughly $25,000.

Despite the bullish outlook suggested by the flag pattern, traders should be aware of tough resistance coming in at $24,740 and $25,625 from major moving averages on higher time frames. These are likely to impede upwards progress and may cause pullbacks or even reversals. 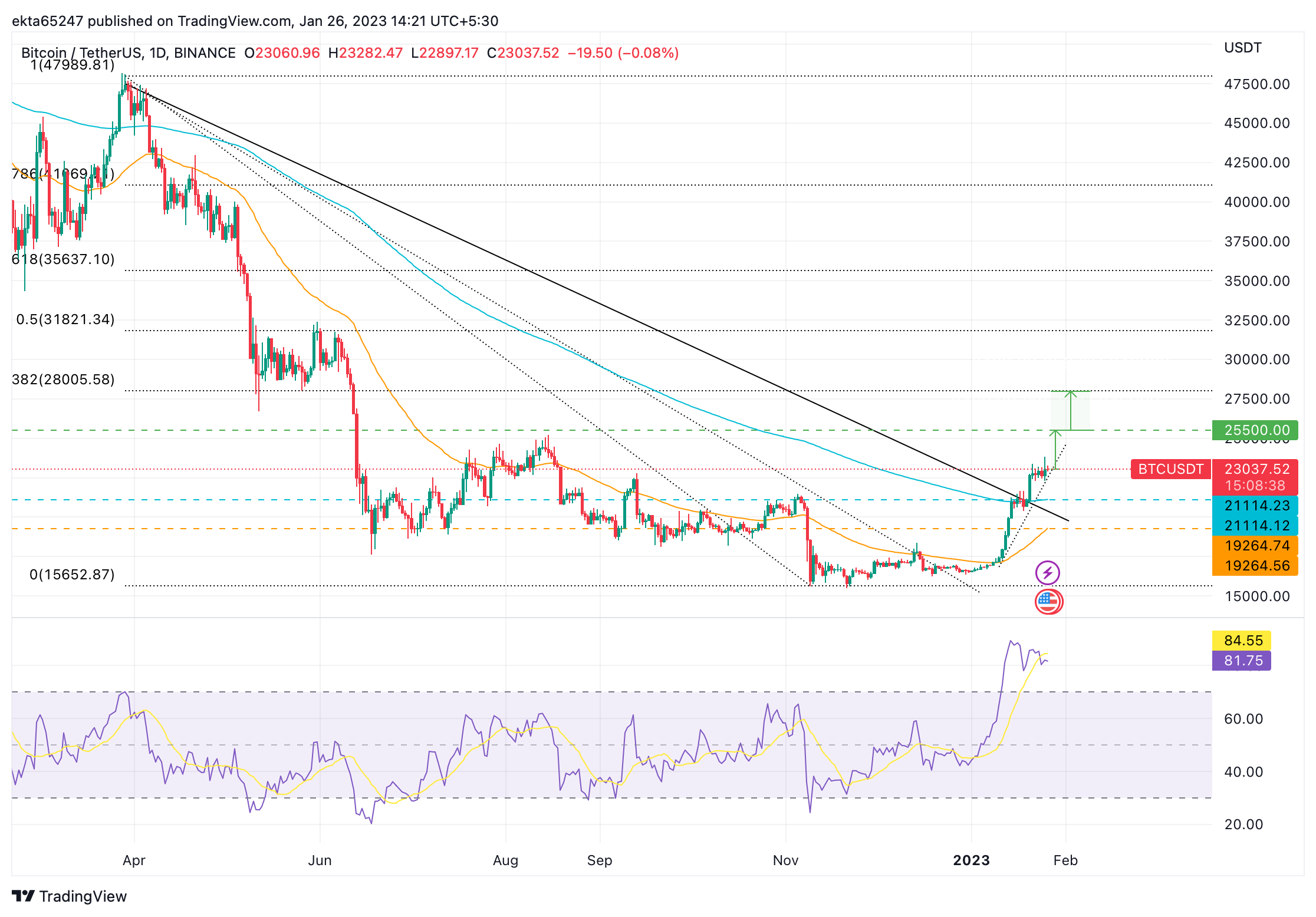 The Relative Strength Index, a momentum indicator has been in the overbought territory since January 11. This signals price may be overbought in the short-term and for bulls not to add any further longs to their positions.